The new season is starting!

The OCC is a non-auditioned community choir that sings songs from the seven Celtic nations, as well as from strongly Celtic-influenced areas (such as the Atlantic provinces, Quebec, Ontario, Appalachia, etc.).  We sing in the six Celtic languages as well as English, French, and Galician dialect Spanish.  A grounding in the languages is not necessary; translations and pronunciation guides are provided for all songs not in English or French.

While an ability to read music is an asset, it's not necessary either; mp3s of all parts are provided on a website where choir members can go to download and learn their parts.  The group is good fun and has a strong sense of community.  We encourage laughter in rehearsals, as the same muscles you use to laugh are the ones you use to sing!

We rehearse on Tuesday evenings from 7:30 pm to 9pm, at St. John the Evangelist Church on the corner of Somerset and Elgin.  We rehearse upstairs in the choir room.

We plan on at least two major concerts a year (usually Christmas and Springtime) as well as competing in Oireachtas Gaeilge Cheanada, an Irish-language festival near Kingston in late June.  This year we may also be performing at the Almonte Celtfest!

For more information, please contact Ellen MacIsaac at ellen at laughingbrook.ca
Posted by The Ottawa Celtic Choir at 11:08 2 comments:

I know this is way late, but our upcoming concert is on March 24th (this Sunday!) at St. Luke's Anglican Church on Somerset Street, Ottawa, at 7:30 pm. Sunday March 24, 2013 - 7:30 pm
O'er the Waves: The Ottawa Celtic Choir presents an evening of songs of the Celtic Nations  and the Celtic diaspora.Location: St. Luke's Anglican Church, 760 Somerset Street, OttawaAdmission to each recital is by donation: there is no set price.

Come and enjoy an evening of excellent music at St. Luke’s.

The Ottawa Celtic Choir is proud to welcome the Côr Meibion Cymraeg Montreal (The Welsh Male Choir of Montreal) to Ottawa on December 15th, 2012!  It's going to be a great concert. 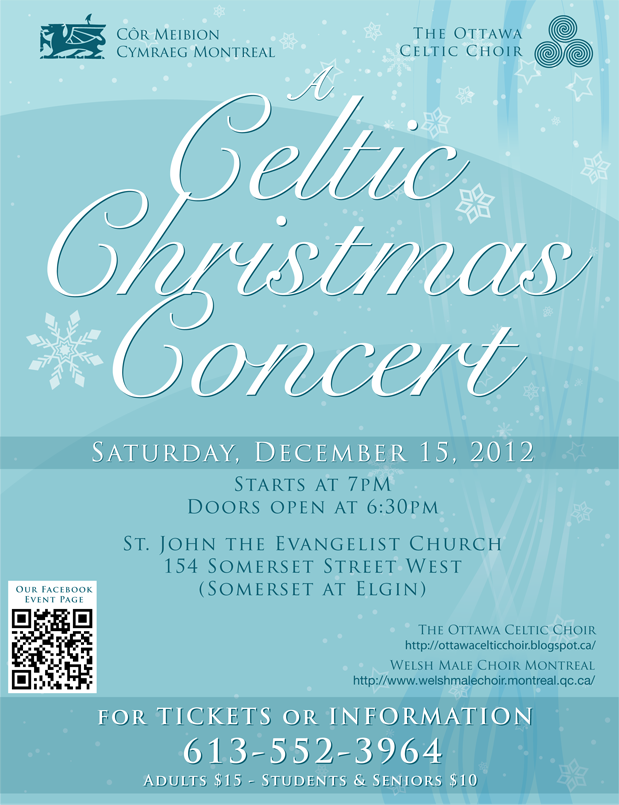 We have a great list of Christmas and festive songs planned, in Welsh as well as English, Irish and Cornish.  Come on out and sing along with us to familiar carols from the Celtic countries, and experience the Welsh midwinter tradition of the Mari Lwyd!

For those who don't know, Wikipedia to the rescue:
The Mari Lwyd (Grey Mare or "Gray Mary" in English), also Y Fari Lwyd, is a Welsh midwinter tradition, possibly to celebrate New Year (see Calennig), although it formerly took place over a period stretching from Christmas to late January. It is a form of visiting wassail, a luck-bringing ritual in which a the participants accompany a person disguised as a horse from house to house (including pubs) and sing at each door in the hope of gaining admittance and being rewarded with food and drink.

Here's a clip from BBC Cymraeg from 1966, showing the Mari Lwyd in action:

Here's a little bit of the Côr Meibion Cymraeg Montreal to wet your whistle:

Posted by The Ottawa Celtic Choir at 07:00 No comments:

A few more of this season's songs to wet your whistle:

Fare Thee Well, Love - anybody who was breathing and had a pulse in Canada in the early '90s knows or has heard this song.  For a while, the Rankins were everywhere, and this was definitely their signature song.  Ours is the Stuart Calvert arrangment.


Reel a Bouche - The choir so loves doing mouth music, and I always felt that Quebecois lilting, or turlutage, was missing from the choir's repertoire.  This is the year to remedy this, with this arrangement of a Quebecois dance tune by Malcolm Daiglish.


An Innis Aigh - I did an arrangement of this song in praise of Cape Breton, interlacing a little melodic surprise in the middle!

And some old favourites from last year:

Dulaman - the raunchiest song that's only superficially about seaweed that I've ever heard.  We do Michael McGlynn's version.


The Parting Glass -  Traditionally sung only at the end of a night of fun in Ireland; it's a bit of a taboo to sing something else after it.  We usually use this one to close our concerts.


O Chi Mi na Mor Bheanna - Another of an enormous repertoire of celtic songs where the author dreams of going home.  This one is specifically a song of the Scottish highlands.


Posted by The Ottawa Celtic Choir at 20:13 No comments:

The Choir's new season is starting!

The Ottawa Celtic Choir is about to start it's next season on September 4th, and it's shaping up to be a great one!  The choir will be performing with two guest choirs this year, the Montreal Welsh Men's Choir in December, and ar n-Oran, Ottawa's Scots Gaelic choir.  As we're always looking for new members, if you'd like to be a part of this year's season, contact the director, Ellen MacIsaac.

Posted by The Ottawa Celtic Choir at 18:40 No comments:

Working on some new songs for the choir...

I gave the choir the summer off so that I could have some time to score new music!  The inspiration for the pieces came from far and wide, and while some of them are more faithful to the originals than others, all the versions I worked on are geared for the singers in the Ottawa Celtic Choir.

First up:
"Taim i mo Shui", by Cor Thaobh a' Leithid.  This is a choir made up entirely of Irish traditional singers from the parish of Gaoth Dobhair (Gweedore) in Co. Donegal, each of them a well-known singer in their own right, who have gotten together to make what is best thought of as a sean-nos choir.  Led by Dominic Mac Giolla Bhride, they have been making waves these past few years with their renditions of Irish-language traditional songs.

Loch Lomond.   Who doesn't know this song?  One of countless songs of loss and exile from the Celtic countries, the speaker in this song says he'll make it home to Loch Lomond faster by dying than by taking the "high road" of life.  Good to have in our back pockets for Robbie Burns' celebrations.


Mo Ghile Mear.  I got pointed to Micheal O Suilleabhain's arrangement of this from our dear friends in the Cois Claddagh Chamber Choir.  An Irish traditional song whose title means "The Gallant Boy", it is a vision song wherein the Goddess Eire laments Bonnie Prince Charlie's loss at the Battle of Culloden.  It's a bookend to the Skye Boat Song, which we already sing.

Nos Galan (Deck the Halls).  Everybody knows this song, but most don't know that it's actually a traditional Welsh New Year's Eve carol, that says "Cold is the man who doesn't love the mountains of Wales, and cold is he who will not get together with friends to ring in the New Year".

My Love is Like a Red Red Rose.  We heard the Near North Voices Choir perform this at our February concert, and backstage, the choir came to me and whispered that they'd like to take a crack at it.  My choir has great taste!


Ambell y Gan.  Keen to get more Welsh in the choir's diet repertoire, I sent away to Cerdd Y Stwyth in Aberystwyth, Wales, for some Welsh sheet music.  I selected a book of folksongs, and this was song #1.  It means "A song now and then", and really sums up the underlying philosophy of the choir: a song now and then helps you keep your head above water, makes heavy burdens lighter, and helps you cope with whatever life throws at you.  Great sentiment!

Tha Mo Ghaol Air Aird A' Chuain.  My husband and I went to see Pixar/Disney's Brave at the theaters this summer, and of all the songs in the movie, this is the one that stuck with me the most.  It plays during the end credits.  And lucky for me, it's a traditional song, and not proprietary to Disney!  This song is known in English as "Jaime's on the Stormy Sea".  And Julie Fowlis does a superb job here.

A Fore Dydd Nadolig,  (starts at 4:34)  a medieval Welsh Carol, also from the little book of Welsh folksongs I picked up.  The melody is incredible, captivating and unpredictable.  We'll see if the choir agrees with me!

Oran nam Mogaisean.  Collected by Margaret Bennett in the Codroy Valley in Newfoundland in the 1970s, the composer was practically next-door neighbours to my grandmother's people.  The song tells a humorous story of a man attempting to make moccasins in the manner of the First Nations, and failing so badly that the sight of them sends the parisioners into fits of giggles that disrupts the sermon when he wears them to church on Sunday.  This particular version is by Rory Campbell of Old Blind Dogs.

Posted by The Ottawa Celtic Choir at 19:07 No comments:

The Ottawa Celtic Choir is putting on another concert this Sunday, March 18th, at 7:30 pm at St. Luke's Anglican Church in Ottawa, as a part of Irish Week in the city.

This isn't the first time we've performed at St. Luke's; we've been a part of their annual recital series for the past three years.  It's a great church to perform in, with very warm and intimate sounding acoustics.

As with past years, we have a guest performer, Timothy Robinson, an uilleann piper.  The concert program promises a wide variety of songs, from the salty to the sacred, and hailing from a number of Celtic nations as well as a tour across Celtic Canada.  As always, we plan for some sing-along numbers to round out our concert; this time it will be some well-known Canadian songs.